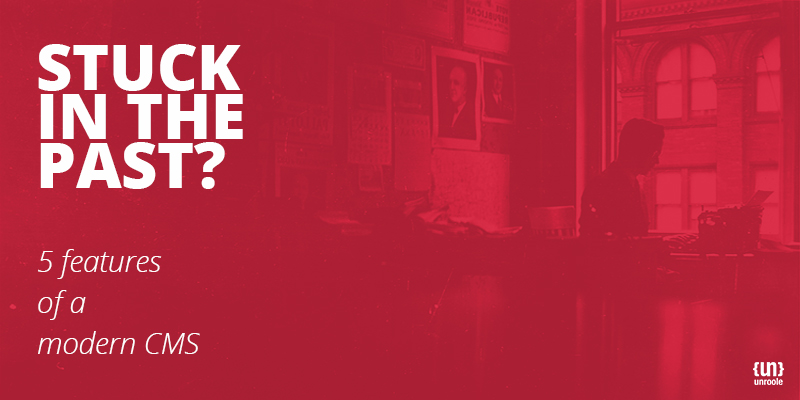 At the beginning of 21st century, the open-source CMS started to enjoy widespread popularity, which in turn helped open web content creation to a larger group. Within this group of content creators, a variety of skillsets and end goals existed, which meant different CMSs ended up targeting and occupying different niches of the market. Drupal became a solution for websites that needed a more complex structure, so they developed their core features to satisfy the needs of complex content organisation and user roles. On the other hand, Wordpress targeted users looking to create simpler websites that could be easily developed. In addition to these main forces in the CMS market, a lot of proprietary solutions spawned. Despite not having as large of a user base as an open source CMS, they are occupying certain untapped verticals of the market. One of these systems is unroole, a cloud-based web development platform where CMS is just one of the features.

What are the needs of the market that current CMSs are not covering? As part of their eZ Publish show, Netgen covered the topic of future of CMS, asking what the needs of the market are which CMS will have to satisfy. Netgen labs guests were Aproov Durga, Senior Analyst in Real Story Group, and Bryan Ruby, founder of cmsreport.com. Five core features they identified as paramount are:

Today it is not enough to have a responsive website that only changes the layout depending on screen size. There is a need to adapt the content to the device as well, given that different devices are used in and interacted with in drastically different ways. Also, research shows that the percentage of smartphone users who use mobile browsers is considerably less than those who use mobile apps. If content creators want to respond to this reality with a robust solution, they currently have to set up separate instances of their website for different devices, further complicating their workflow. Often they choose not to, because the CMS they use is not giving them an option to do so in a straightforward manner. Wordpress has started supporting multi-site setups, but has not lived up to expectations as it is not very flexible. Also, the number of developers who have the a mastery of the Wordpress multi-site feature is very limited. Unlike Wordpress, multi-site setup is a core functionality of unroole, and separate channels can share all code and content without any limitations. Also, the process of creating new website channels is set up to be easy for both content editors and developers.

A CMS should let the developers decide on information structure and not set up its own structure that developers must try and customize for their own needs. Wordpress, at its core, has its own structure of posts, static pages and navigation. Since Wordpress is primarily a blogging platform, creating this initial structure makes sense for them. Wordpress also allows enough flexibility to build upon this core architecture, but if a developer has a more custom solution in mind for their website, it becomes a more onerous task to try and make Wordpress fit the developers needs. Aproov Durga, one of the guests on the eZ Publish show, says the CMS should be “information architecture agnostic” and that all decisions in this area should be made by developers and content creators. In unroole, users have the option to begin their new project from an entirely blank slate, meaning they don’t have to worry about creating workarounds for the existing structure and can just start developing their solution to work exactly how they want.

At its core, content creation has remained the same in the CMS since the beginning; authors have a rich-text editor and the ability to add various media. Later, the market began asking for more flexibility as websites grew more complex. Wordpress responded with the addition of shortcodes, and almost immediately developers of Wordpress plugins started implementing it. When it comes to user experience, this is not the ideal solution as each plugin has its own logic that has to be overwritten by the developer. Additionally, these plugins are catch-all solutions, meaning they provide the user with all the possible options for customization. Though this may seem ideal, giving the user too many options can have a negative impact on user experience. In the eZ Publish show, all guests agreed that CMS of the future should give the content editor only options that are necessary per situation in order to avoid the possibility of bad formatting and breaking the design. The process of adding content has been rethought entirely in unroole, putting it far more in line with the future described by the show’s guests. In unroole, pages are created via custom building blocks. The developer can set exactly which options will be available to the content creator, thus allowing the developer to create a very clear divide between content and presentation.

Additionally, the managing of content changes should not be a linear “edit - preview - publish” process. Olivier Dobberaku, president of TYPO3 association, says that content creation has to be a central point of collaboration for all people involved in the process. A good CMS should allow for interaction during all points and in all aspects of content creation, which would allow for easier testing and adaptation of content. On this criteria, Wordpress has not progressed much since its beginnings. The process of creating and editing content in Wordpress is always final; there can be only one version of the content. Conversely, unroole is designed to allow versioning of structure, content and design on each page and can be set live whenever needed, even scheduling it to go live at a future date.

Integration with other services

Previously CMS vendors tried to provide all the tools for various user needs, including shops, forms, galleries, and surveys. Soon, they realised that no one company can create the best implementation of every tool and gave users the freedom to integrate third-party tools. The CMS of the future will also need to support various third-party APIs in a flexible manner. Wordpress, because of its defined information architecture, demands that integration is made with plugins. Wordpress developers are tasked with either creating their own plugin or finding, testing and customizing existing plugins so Wordpress and an API can communicate. Since unroole doesn’t have a set infrastructure in the first place, there is no need for “translating” between the API and and CMS via an intermediary. Next step in integration with other services will be the ability for users to generate APIs in the CMS. For now, none of the CMSs we are discussing here have this possibility.

The advantages of working in the cloud don’t need much explaining as the technology has been present for several years now and is only growing. However, most CMSs were designed in the time before the cloud and still haven’t made the transition to being primarily cloud-based. In the web development field specifically, cloud-based services are usually cater to a general audience with little-to-no experience with coding. With unroole, the whole process of developing and managing a website has been moved to the cloud, with all the tools in one place. The key advantage of this approach is that all backend operations are removed from the process of web development and stability of the system is at an optimal level. Also, collaboration during development and administrating is more efficient as the system holds all the website content and code in one place.